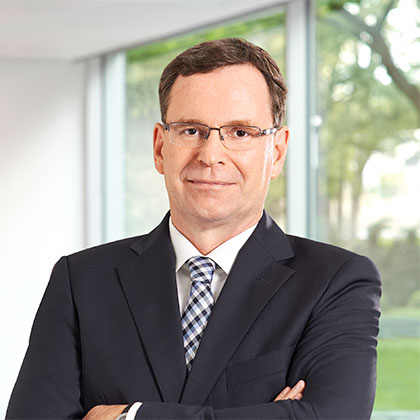 Dr. Thomas Duve joined KfW in 1995 and, since August 2010, he has been a Director in the Africa region, currently for the Southern Africa Department, with a multisectoral portfolio of approximately 4 billion Euro. He has been the Chair of the board of the Africa Agriculture and Trade Investment Fund (AATIF) since 2011, and in 2013/14 was also a member of the board of the Emerging Africa Infrastructure Fund. Thomas Duve’s focus areas include renewable energy and energy efficiency, water supply, HIV/AIDS, biodiversity, and agricultural finance.

Prior to joining KfW, Thomas Duve worked in rural development projects with GIZ in Ghana and Burkina Faso (1991-1994).

After graduating from Justus Liebig University in Giessen with a degree in geography and biology, Thomas Duve carried out research on plant diseases in South Korea and the Philippines. He obtained a PhD-Degree in 1989 and completed a Postgraduate Course in Rural Development in 1990.